With the momentous decision in 2012 to amalgamate all the main adult and youth teams in the town under one club name – Snodland Town Football Club – football in Snodland has moved forward at a faster pace than at any time in its long and eventful past.

In 2012 the club acquired a lease from the local Town Council to enable development of its own ground. An ambitious development plan has since seen the ground transformed to meet Southern Counties East Football League standards including floodlighting and a 100-seat spectator stand. With new dressing rooms and hospitality facilities planned, the ground will become the focal point for all the club’s community activities.

During this time, new pitches have become available at the club’s Potyns Sports Field and the majority of our youth and junior teams will be playing there along with the adult teams. A new 3G facility is also now available to the club for training and small sided games. 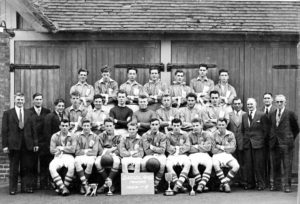 Snodland Minors FC 1954/55
This Minors photo is from their most successful season of 1954-55. The trophies are: the Maidstone Minor League and Cup; the Medway Minor League and Cup. It is taken in the grounds of The Bull Public House in Snodland. Note the garage behind the players and officials. It’s still there and is opposite the Co-Op door to the car park!

Back in the late 1940’s, when Snodland first began playing matches at the Recreation Ground as Snodland Minors FC, such facilities would, of course, never have been in anyone’s mind. However, the founders of the Boys’ club were ambitious and by 1955 had purchased land adjacent to the Rec and constructed modest changing facilities.

In the 1956-57 season the boys’ team evolved to a men’s team and entered Division 3B of the Maidstone and District Football League. The club immediately struck gold and won the division without losing a game. The following season brought further success, with Snodland completing a double by winning division 2A and the League’s Challenge Cup “B” competition. The club came runners up in Division 1 in 1958-59, and then won the newly christened “Maidstone Premier Division” in 1959-60 after a close fight against local rivals Wouldham FC. 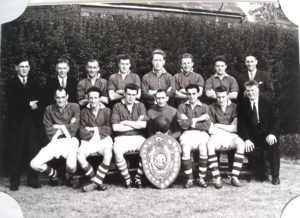 Snodland also won the Kent Junior Cup “A” in 1961-62 and enjoyed further cup success in 1963-64 when the club won the Rochester League’s Quarter Century Cup. In the mid 1960s Snodland spent five seasons in the Rochester League, with their best finish being runners-up in 1963-64. The Club returned to the Maidstone League in 1968-69, playing in Division 1. This was a period of rebuilding for the club and it took until 1973-74 for Snodland to win the Division and return to the Premier Division. The 1983-84 season saw Snodland complete a triple. After a wait of 23 years the club won the Maidstone Premier League, along with the Challenge Cup “A” and the Sittingbourne and Milton Charity Cup. In recognition of this achievement the Parish Council presented a silver salver to Snodland that was accepted on behalf of the club by Bill Wells, a longstanding player and manager. 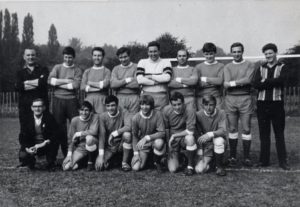 In 2016 the club staged its first match in the Southern Counties East Football League, Division One, the highest level of football ever played in Snodland.

With our highly successful Snodland Town junior and youth teams enjoying success at every level, a new girls’ team launched this season, and our Reserve team & Sunday team established in the Kent County League and Maidstone Sunday League, respectively, the future is indeed bright for Snodland Town. 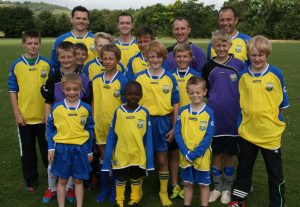 We are one of the largest voluntary organisations in the area, catering for the football needs of nearly 200 children, from 6 years to adults. We are currently working very closely with other local organisations, including Snodland Sports Association, the Football Alliance, the Town Council, the Community Association, Snodland Primary School and Holmesdale Technology College, to ensure that as many children as possible are able to participate in their chosen sport.

Snodland Town Nomads FC continually strives to improve standards and provide an increasingly safe environment for children to play football in, free from bullying and anti-social behaviour. To maintain this improvement the club has already achieved the FA Charter Standard, which is a target set by the FA and which all clubs are required to acquire in the future.

Our managers have attended Child Safety, First Aid and Level 1 Coaching courses, together with Criminal Records Bureau (CRB) checks, all of which will benefit the community. 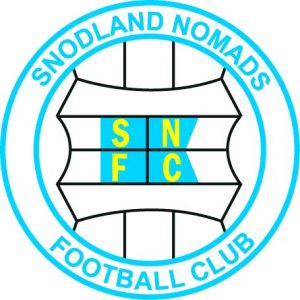 Original Snodland Nomads badge design from which the current badge was adapted.

In a bid to improve the standard of coaching at the club, some managers have also completed the FA Youth Award Modules 1 and 2 courses which looks at the development of the children in a football environment as well as the Level 1 goalkeeping course.

Together with other football clubs in Snodland we are developing a football pyramid system for which we hope to provide the foundation level for players who will then have the opportunity to progress to higher standards.

We are the largest organisation in the town and regularly arrange social activities in the town for our players and parents and local community, including our famous Father Christmas delivery run.

Currently we are fielding around 14 teams each week with the intention of introducing teams into new age groups to play in local and county leagues.