On Friday 23rd September, for the 2nd time in a week, a large crowd witnessed floodlit football at Potyns sports ground this time courtesy of the youth section. Following winning the summers penalty shoot out fundraising event Snodland Nomads u14s (managed by Lee Battell) held an invitational evening with 45 minute matches against both the under 13s (managed by Mark Thompson) and under 15s (managed by Steve Young). There was also a Nomads penalty shoot out for any youth players not involved in the game to be held at the interval.

First up was against the high flying under 13’s w 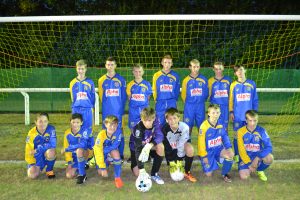 ho had enjoyed a good start to the season. Under 14s started quickly though and were benefitting from their power and pace. They dominated the early stages and created a few chances before finally scoring. A 2nd quickly followed and it looked ominous for the U13’s. With a long evenings football looming a few subs and alterations were made to the U14’s which seemed to upset the balance of the side. Midway through the U13’s started to settle and their passing game began to come through. The 14’s were defending resolutely and still looked dangerous on the break but found themselves having to defend. The u13s managed to score a good goal and then went looking 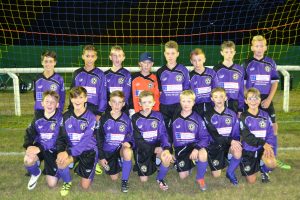 for an equaliser. Despite getting into some good positions a mixture of good defending and a little bit of bad luck with the final pass meant that the equaliser wouldn’t come. The final whistle went to an enjoyable end-to-end game played at a good pace.

Whilst the under 14’s took a brief rest all other Nomads players who had attended were then invited to take part in a penalty shoot out “under the lights”. Around 30 of our younger players took part with goalkeepers from the older age groups going in goal. 2 prizes were up for grabs in a sudden-death shootout. Some great penalties were taken.

Well done to the winners- Alfie Spain and Harry Spain

Next up the U14’s were up against the U15’s – both sides having suffered stuttering starts to the season, following division champion (U14s) and cup winner (U15’s) successes last season. The U15s started strong and their freshness was evident as they took a quic 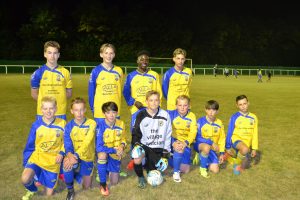 k lead with a fine long range effort. The lead was then doubled, this time the U14’s were up against it. They regrouped and went looking to get back in the game and scored with another great effort from distance. They continued to press looking for an equaliser but this time the freshness and pace of the U15’s was causing problems particularly down the U14’s right hand side. A couple more quick fire goals proved to be the U14’s undoing and with tiredness now setting in the U15’s dominated the latter stages despite the best efforts of the U14’s. Several fine saves including a penalty save from the U14’s keeper keeping them at bay.

With thanks to all involved in the evening, including the referee for both games, Dave Morgan, all the players and coaches, everyone involved in the setting up and smooth running. Also thanks to Clare and her staff from The Hungry Hut for providing welcome hot food and refreshments.

Lastly a big thanks to all the supporters who attended.